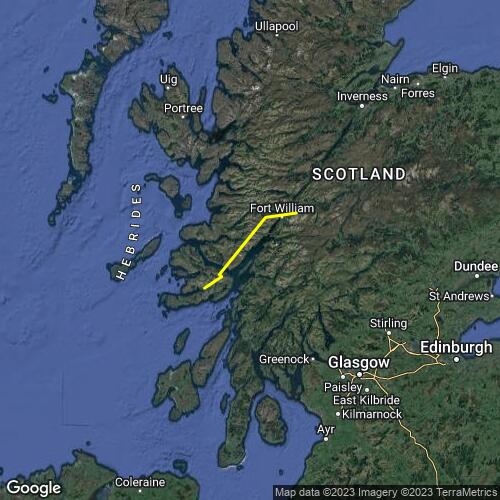 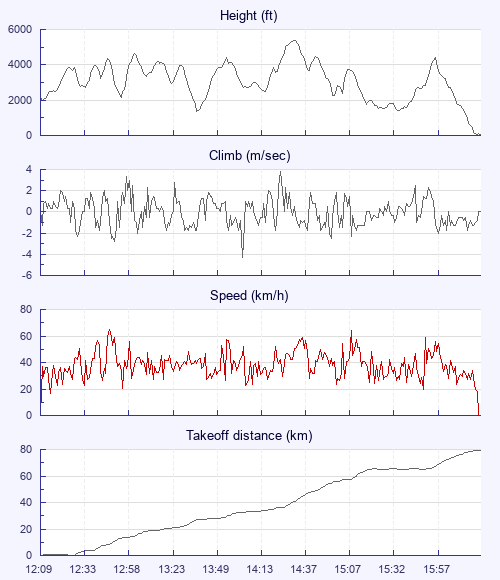 So I landed half a kilometre from my declared goal of 80k. Gutted! Missed out on the 100 XC League points! Give that man a good talking to! Half a kilometre! Any decent pilot should have been able to close that gap with good flying.

Well in the world of numbers and chasing points that is how the rhetoric goes.

However the real story of the day is somewhat different.

The forecast looked good for my local site but with potential for overdevelopment. Wind strength might make deciding how to make the best of the day interesting.

I get an early text from Matt and Jules to say they are heading for Anoach Mor - great!

When I arrive at the restaurant at the top of the gondola ride I am greeted with the sight of several people pouring over phones looking at maps and weather info. Matt and Jules are there and so was David, Ben and Richard.

The usual thought of 'head east into wind for an out and return' was looking doubtful due to wind and cloud build. Out of the blue someone says Mull? 'Why don't we fly to Mull, it's not been done before'? So before we dismiss it as a crazy idea a route is planned and to make it more interesting we declare a point on the island 80k away in order to get 100 XC points.

On the Sgurr Finniosgaig launch the sky is already looking pretty active at 11:30 and showers are forming upwind! No time to lose.

David and Ben are first away gliding down into seemingly dead air before hooking into something. I follow quickly and soon we are thermalling nicely above launch. By the time we are all established the sky looks even more active and there is radio talk of 'keep down our track or head west a little to avoid showers'

What followed was one of the most memorable flights, across Fort William and over the head of Loch Linnhe, west down the side of Loch Eil to avoid the most threatening looking clouds and into the boonies of Ardgour. By this point we were into the meat of the flight and a collaborative group consisting of Jules, Matt, Richard, Ben and myself had gaggled up. A long glide deep into Glen Scaddle, getting uncomfortably low, split us up. Ben carried on west over Loch Shiel, landing in Glen Uig. Matt headed eastwards towards Loch Linnhe while Jules, Richard and I struggled on eventually getting back to a decent height. A long walk out is always a good incentive to focus good thermalling technic!

A little later I had the joy and privilege to fly in the close company of a Golden Eagle. Magnificent!

Cloud and rain dodging was required as we continued south, over the rugged peak of Garbh Beinn and our first road since crossing Fort William. On into Kingairloch and over Glensanda Quarry, one of Europe's largest open quarries, carving out a mountain for high quality granite.

By now Mull was getting tantalisingly close and Matt had rejoined us after a solo mission down the side of Loch Linnhe. We were once again joined by an eagle (the same one I am not sure, as Ben also recounted flying with one on his route) who was showing us the way to stay under the convergence cloud forming across the gap of the Sound of Mull.

The wind was still north east and aided by a perfectly into wind ridge, the eagle and convergence, I climbed up and up and followed Jules and Richard who had already set off over the 4 kilometre crossing onto Mull.

We had made it! Magic. Making goal suddenly didn't seem so important anymore.

The flight had been stunning with views across wild landscapes in every direction.

Needless to say the competitive streak couldn't quite drop the idea of goal. So after some serious grovelling in the bottom of a coire, after making landfall on Mull, I climbed as high as I dared under a threatening looking cloud and glided on passing over Richard and Jules who were low and struggling.

A massive rain squall lay between me and goal. There didn't seem to be any sensible way round either side of it but fortunately it seemed to be keeping its distance, drifting with the wind. My glide to goal said 9:1 required and I had started with a glide of 13:1. It was going to be close.

The rain squall was shutting down any lift ahead of me so I just tried to optimise my glide as well as I could.

I landed half a kilometre short with the biggest grin on my face.

Who cares about goal and points!