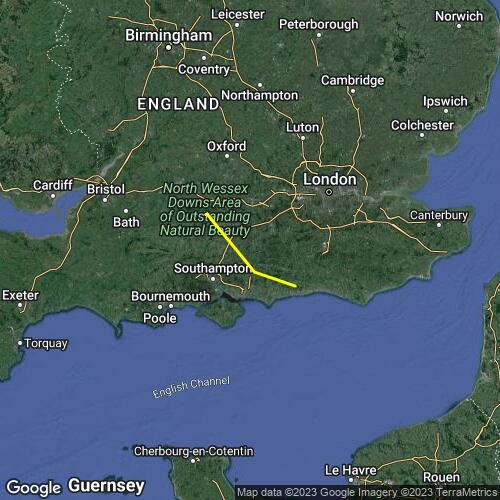 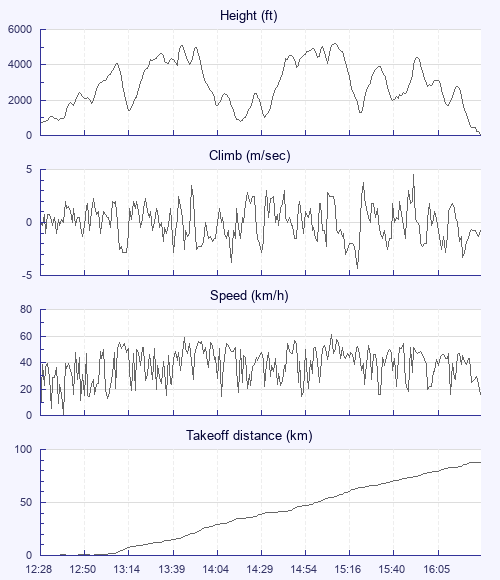 First ever flight from Combe, what an introduction! We arrived, on a promising forecast, but, busy, with a lot struggling in the light scratchy conditions. Laughed when Kirsty said that there was a nice 90k to be had from here, yeah right! In my dreams.

Of course she got away early, no surprises there - Viv spent a while trying to find something useable, looked like hot work to me! When she managed to get away, I thought it was about time I did something.

Clipped in for ages, dressed for cloud base, and getting a little warm! Come on, there's got to be something. A low airtimer, I assume, wobbled around as they flew past right in front of me, then the leading edge rolled forward slightly and then stood up again, Go! Straight into it, blimey, I got it right, not spectacular but enough to give me time to find something better. Site guide suggested the edge of the wood as a good source - surprisingly I'd read it!

Sounds daft, but, found a pleasant climb, and after a bit of sniffing around decided that this could be useful, so took it to base! Doesn't that sound easy? Actually thinking back, it was. Made the decision, don't just faff around, let's see if we can really go with this. The drift was horrendously slow, only to be expected given the conditions on the ground. I kept falling out of the front of the thermal, they just never want to travel as fast as you would like. Settled down, and gave myself a serious talking to, only option was to head off on a glide to the darkest flat bottomed cloud I could see. Yay! Got there without losing as much as expected, hit it smack on, and back to base again, blimey! I've got a good feeling about today!

The two gliders I'd been with had dropped out, so was on my own, actually quite like that as you can 'zone out' a bit. Textbook after this, glide, climb, glide! Time to take stock, glider, Nyos RS and harness, Woody Valley GTO light, really do seem to be a combination made in heaven. Still trying to master the Oudie, multi tasking not my strong point, zooming in and out to check airspace, and looking at the assorted boxes, found one Tdis, I think, the penny dropped, weee! 45k, already!

Better really concentrate now, this could be serious! Serves me right, getting all excited/distracted, got a little low! Met a very friendly buzzard who wanted to play, so we did, and back to the white stuff. Past Popham and then thermalling with a couple of gliders from Lasham, it doesn't get any better than this. Track east to avoid Solent airspace and that's the difficult bit done, or so I thought. Really started to get excited now as the k's were mounting up, the climbs just kept coming, I can't be this lucky. Yeah right, the Oudie went ballistic 'airspace'! What the hell have I missed? So cocky with my latest really good climb I was fast approaching London TMA! Screen went red, getting noisier, and rapidly counting down to 5,500', bloody hell, big ears and bar, still counting down. You fool, serves you right if you've blown it, counter slowed and stopped, jeez that was way too close.

Heart rate back to normal, let's just settle down and go on a nice relaxing glide at a sensible height, check that little box, approaching 80k and still with good height, look out Kirsty! Another one of my dreams!

More climbing and gliding north of Chichester, bigger gaps and more sunshine, everything seemed to be settling down, smoother climbs, fluffier clouds. Still relaxed, but, think I might just look for somewhere to land, 90k and four hours (pb) actually starting to feel tired. Having got this far the last thing I need is to screw up the next bit. Had a good look around, found a huge field being cut for silage next to a village and railway station, yup, that will do nicely. Couple of leisurely 360s, two buzzards coming up to me! Nope, sorry, can't play anymore, time get back to earth, textbook landing, farmer arrived as I dropped the canopy on the grass, 'are you ok? That looked grand' - yes! Yes! Yes!

First retrieve via Southern rail, but, that's a whole nother story and I don't want to bore you any more. As Helen Gant would say 'a nadventure' how right she is.