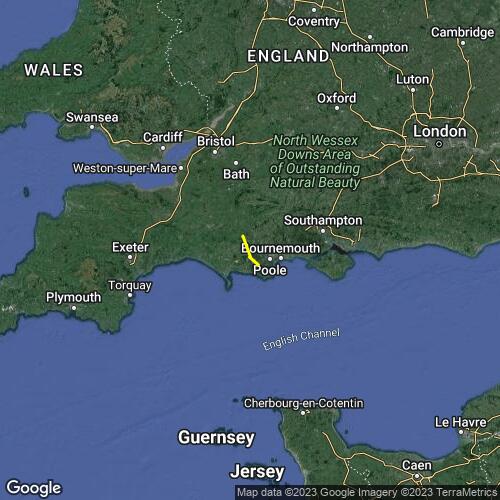 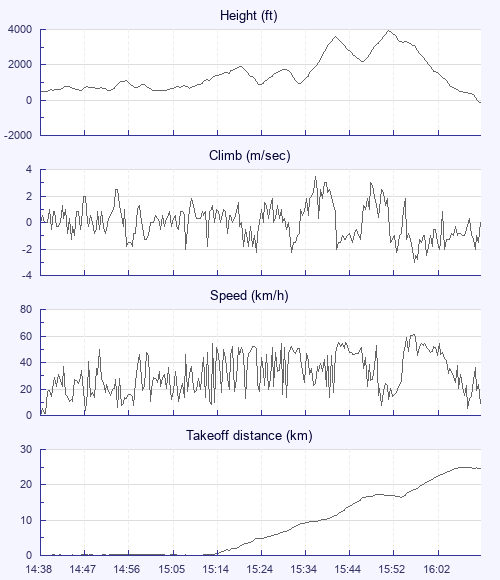 An interesting flight this, my second of the week and a day when I didn't really think about getting away from the hill.

We arrived late, after 1.00pm and stood around, eating lunch and watching a couple at height and a few others scratching about close to the ground in the bits of thermal coming through, not many pilots there though apart from the school. One other pilot (Sean) climbed away as I took off and I spent quite a while scratching about as well. I had my feet out to land several times but found a bubble and carried on flying and then noticed a few rooks, playing about to my left. I flew over to join them and away we went.

The sky over the back was very dark and uninspiring and there wasn't a lot of sun on the ground but I was fed up of scratching by then and thought I might as well go with it. The thermal seemed to be tracking along the ground rather than up and turning into wind I had very little groundspeed. Whatever, it was nice to be away so I followed it along then spotted a few seagulls downwind who seemed to have something. Joining them worked and the climb improved. The gulls flew off and I lost the lift and just drifted downwind, low and looking for a landing field. I picked my landing field in a patch of sunshine, turned and climbed. Oh well, this seems to be working, so I just carried on, joining the sunshine dots, just as Helen G tells me to do, all the way to cloudbase!

Well, that was unexpected, but I made the most of it, gliding on to Bere Regis and enjoying the view but keeping a wary eye on the increasingly black clouds above as it looked like the black stuff to the east was now joining up with the convergence line from the west. The climbs were quite nice and smooth, not like the choppy stuff we had earlier in the week and I was enjoying myself until I got a bit too close to the cloud and had a WTF moment. My rapid descent technique was deployed (big ears and speed bar, I don't do radical stuff! ) worked well and I descended back into my comfort zone about a thousand feet lower and well away from the cloud.

Gliding on downwind towards Wareham and looking at the sky I decided to pick a nice big field and land, given that the windmill I'd spotted was rather whizzing around and the forecast was for possible big showers later.

I landed just outside Wareham, very pleased with my flight, managing to climb out, coping with getting pretty close to the clouds and flying further from Bell than I have done before.

Two very different flights in the same week so lots to think about in my personal debrief and more lovely photos from my trusty GoPro.

Sitting at the roadside waiting for Phil with the van, the sky just got blacker and I felt a handful of very fat raindrops so I was quite glad to be on the ground by then.