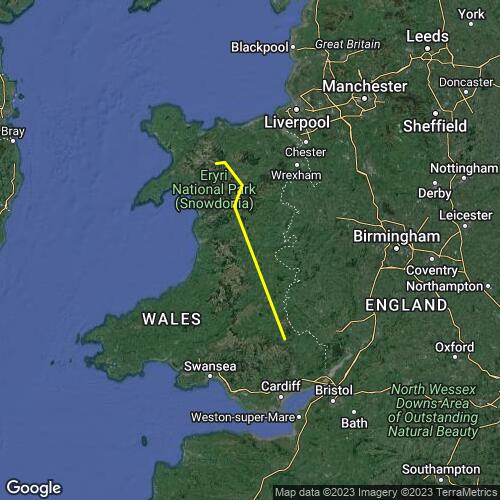 Woke up and briefly considered going for a run before making a spontaneous decision to head for Wales instead. Called Steve Bennett and gave him 10 minutes notice of a pickup before setting off up the M5. Steve Hammett and Remi Picket were already on the road about half an hour ahead and we made excellent time to Crickhowell. A quick sweaty walk up the hill and we found Simon Green setting up in the south bowl with Ali Andrews and a few others trying their luck in the south east takeoff too. The sky was clear blue but Cus forming nicely, the wind was bang on and fairly fresh and there were a couple of tempting looking streets beginning to form to the east.

Simon took off first and went up like a cork. I did much the same and Remi, Steve Hammett and Steve Bennett followed suit. We were expecting to be up and away pretty fast but it took an hour of scratching in broken scrappy thermals before Simon, Remi and I found one that was good enough. There was quite a strong wind gradient with a compression over the hill which didn't help.

Once up though the climbs were smooth and peachy and we got to base at about 5,000ft in no time. We cross winded two streets to avoid Sennybridge danger area then pointed downwind and made like dolphins. Every cloud had lift underneath and there was lift in between quite often too. Base rose steadily as we tracked north and before long it was at 6,000ft. We were drifting close to the sea breeze front so I opted to move another street inland early, while Simon and Remi carried on in the one we were in. I'd set Bala as goal at 120k, thinking that I didn't feel necky enough to go over the Snowdonia range in case the sea breeze was blasting down the valleys from the north coast. Unfortunately that nearly cost me the day as the cloud I aimed for was one of the few that wasn't working all day and I ended up having to take a very snotty scrappy lea sider low down to get me back off the deck and up to base again. I coasted along towards goal with the wind direction and my goal indicator gradually starting to diverge until when I was about 20km out goal was now 30 degrees off to my right.

In the end I opted for Bala because I'd never got to goal on a UK XC before and I knew it was over 100k too - another first for me. As I cross winded to Bala on the southern shore of the lake I was hoovered up into one of the strongest thermals of the day and it was a real wrench to leave it and keep going towards goal, but I still arrived at 4,500ft! I could now see a vague street heading directly towards Snowdon although the clouds looked like the day was starting to fade rapidly. I dithered for a bit over whether to just land at Bala and get a train, then a 1up persuaded me to keep going and head over the boonies towards Betws y Coed. As it was I found nothing else and a final glide into what I thought was Betws put me on the ground at 150k - PB smashed out of sight and at 6hrs in the air my longest flight too!

Looking up at the village sign from the landing field I realised I'd landed in Dolwyddelan instead but a quick hitch to Betws y Coed and I was getting outside a pint in the Royal Oak!

Steve Bennett was back at my car having set his own PB of 63km but we realised it would take about 8hrs for him to get to me and back to Devon and divorce was likely if he suggested to Mrs B that he overnight in Wales and drive down the next morning, so I started hitching along the A5. Within 5 minutes who should turn up but Simon who had landed 10km away and had been retrieved by his dad! On the way south, we heard from Ali Andrews who had finally got away from the hill at 4.40pm and still made goal for 100k!

After a dirty pizza in Llangollen Steve and I met up on the outskirts of Shrewsbury and we headed home with massive grins on our faces, arriving back at 0230.

Longest time in the air.