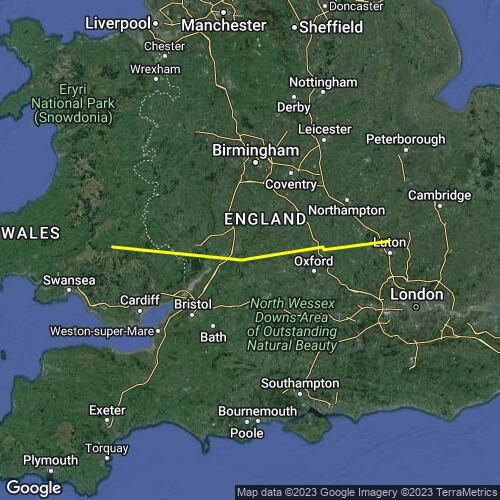 You can be forgiven for not knowing about Sharpenhoe as even if you drove past it you probably wouldn't even think it could possibly be a flying site. A shallow slopey field next to a small tree-lined bowl doesn't give much clue of what followed.

Hugh and I had been looking at the track of the anticyclone moving across the UK and it just happened to be perfect for Sharpenhoe yesterday with forecast NE flow early in the flight moving to just south of east into Wales. We declared a goal of 150km in Leominster and leapt off, together with Jimmy Piper. The first climb out was slow and scrabbly and barely got above 3k ft. This set the scene as we struggled for nearly three hours to cover 60km. Plenty of thermals but all super scrappy, Jimmy was very unlucky to drop out just before the conditions started to improve.

The drift took us too far south for our goal and as we arrived at Cheltenham we had to decide whether to head into Wales or turn down to Devon. The line into Wales was working beautifully by now and we raced along stunning lift lines just pausing to stop in by now pretty stonking thermals. With no sign of a sea breeze, we blatted on hitting the Black Mountains just south of Pandy. From 5k ft in the evening sun they looked breath-taking. The day by now was clearly fading and after a bit of ridge soaring on the Brecons we dropped down to the road.

My longest flight anywhere on the planet is good enough but doing it in England, from the tiniest hill imagineable, wingtip to wingtip with my old mate Hugh that really takes some beating… Some days are special but this one was off the scale.