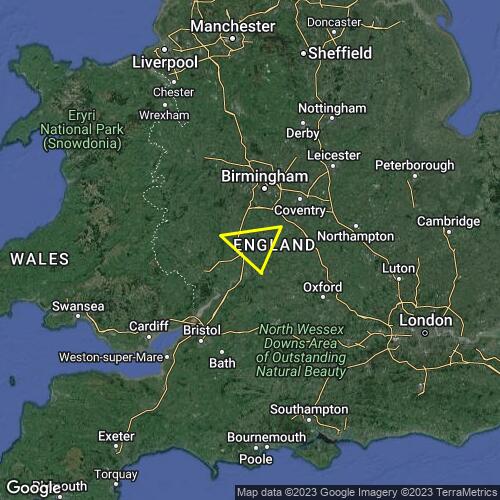 We had been given the heads-up from Rebecca that Monday was looking like a big day so Richard O and I got to the field early to get the winch out. The inevitable faffing ensued and we actually only got going about 12:15, wasting a good hour of usable day. The plan was to dribble along the first leg directly downwind to just North of Malvern then push east to Stratford before running back along the higher ground into a hopefully dying headwind.

I was struggling a bit to leave the field when Ken, ( on the tow behind me! ) hooked into a thermal and escorted me up to base where we met with Rich who'd been waiting patiently. With Graham and Charles coming up quickly we set off as a group and this made the first leg relatively straightforward. Rich decided to kick trees for a while as we crossed the Severn but got up from ridiculously low and followed along a few kms behind. Wayne caught Graham and I near Malvern saving us from a 0.5m minceathon, and we pushed to the first turnpoint near Suckley where conditions improved. Flying as a group the pace picked up heading east and despite a slight headwind we made very good progress as base lifted to 6 grand. Observation is such a key skill in group flying and Wayne managed to detach himself from Gray and I simply by not looking behind him. Gray and I were able to spot his sinky glide and just by moving right by 200m we had a much better line staying very high to the second turnpoint. By the time he'd got back up we were 6km ahead.

Climbs on the way home became more sporadic and weakened by an ever thickening layer of cirrus and I knew from about 20km out it was going to be a struggle to get back to the field. We took a decent climb over Evesham but with no more clouds on the way in it needed a bit of a miracle. For much of the final glide my instruments were saying I'd arrive with 200m and at one point my glide required to goal got down to 9:1 but as I hit the slightest of headwinds lower down it was a death of a thousand cuts. With 1km to go I had to bail on the declared triangle and just go for closing what we had, landing 600m short of the field. Hey ho, still very happy to find I had closed what turned out to be a record triangle.

Many thanks to the whole team at Xclent. Winching in the UK has such a great future and it's great to see more tow groups getting established across the country. For anyone keen on flying big UK triangles(retrieves are so much easier), get yourself qualified and seek out your nearest group or set one up yourselves. We don't have hills in some of the best, airspace free areas of the country so who knows what can be achieved, winching up from the Elysian fields of England.