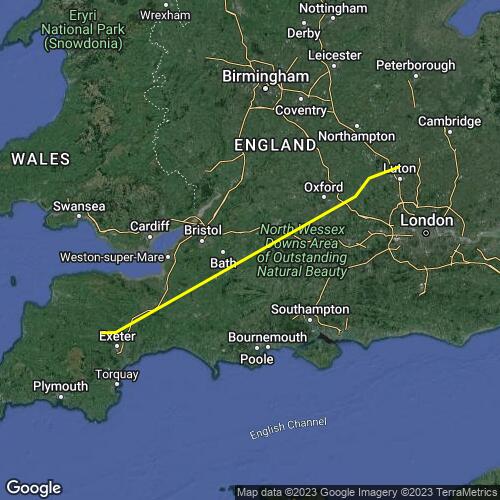 Sharpenhoe is a marmite site. Actually, you pretty much hate all the time. Launch in rotor behind a hedge line down a very shallow slope, dive over some gorse bushes and hope for the best… And then your reward is a tree-covered tiny bowl to hopefully soar.

If its blowing its tits off you might be able to stay up, or as Luke Nicol discovered when he launched first, get blown to pieces by rough easterly inverted gobshites of nastiness. If it drops a bit, you can easily end up at the bottom, all 60 metres away.

Anyhow - after Luke had had enough, it moderated, got more sensible, and me, Mark Watts, Graham Steel and Rog Turner launched to join Andy Hollidge. We took a snotty climb to about 1500 ft over the back. And then basically got drilled in sink, clung on to whatever we could with our fingernails, and clawed our way across the towns towards Oxford. Proper lumpy, proper horrible.

"Can't hear you Mark. Flap your arms if you want to land as well"

Mark promptly folds his arms across his chest.

I'm a bit scared to be honest. It seems a bit windy, and its really rough. After 60 km or so Graham gets drilled but lands safely with forward speed which is reassuring.

Mark and I squeak on past Uffington, sometimes getting up a bit, mostly not.

Coming up to Swindon, just short of Liddington, Mark says he fancies the look of some brown fields, and PING, we hit a proper climb! 4 m/s up through the inversion to 5 grand. Finally. But it's already what, 3 pm?

We push on faster, connecting with some nicer climbs, but there are still no clouds all the way and it's total guess work.

Over Salisbury Plain there are huge plumes of white smoke, probably from army exercises. The smoke obscures the horizon to the south. Sometimes I feel like we're two high altitude jet pilots, circling in the blue, topping up to 5,500 ft, and pushing on.

Into Somerset, down from the high ground, and we're plonked down again to 3 grand. Lines are everything, mine is lucky, as I crosswind to some leeside slopes, Mark's is not, and he lands at Glastonbury.

First car stops. "Where are you headed? "

I get a low climb, then cruise over Taunton with 80 km/h ground speed. I get to over 6 grand over the city. Looking down, I seem to be going the same speeds as the cars on the M5 heading towards Cornwall.

Now - we'd set goal at Holsworthy, due west of Tiverton, for a reason… The sea air was forecast to push in from the south.

But I see the first two cumulus of the day pop up at what must be over 7 grand downwind, somewhere before Dartmoor.

This MUST BE THE LINE. THE MAGIC LINE! I am convinced. This part of Devon shrinks in from the sea either side, and I think you need to be spot on with your line to make it through. The NE wind is strong, so I forget goal and keep going more WSW following the M5.

I land at the end of a farmtrack next to three cottages. I see a woman upstairs in one of them watch me land, and then shut the window tight.

Luckily there's phone signal, and the taxi I call arrives in 15 minutes - an absolute miracle.