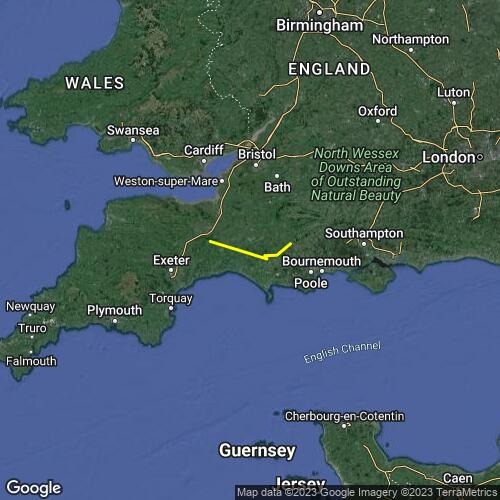 First visit to Hambledon Hill in the great, if slightly bleary company of Dan.

The long wheat out front made inbound thermals pretty easy to spot and we were soon away with a. N. other pilot (name? ) down from London.

Slightly lumpy inversion early on ≈ 3,500' climbs below were strong, above, more mincing.

We played leapfrog pushing out hunting for climbs on separate tracks then rejoining and were nicely in sync, until I fluffed pushing too far into the blue hole to the North, and had to turn back almost into wind to join Dan who was already speccing out and at Cerne Abbas we were separated by altitude.

Thereafter we worked the SBF, switching between the lifty but lower Virga at the uphill end of the wedge, to the sporadic and higher clouds triggered further inland by the thin end of the SBF wedge. The front was not a clean, well-defined line, so at one point I fell into the lee side, but with quite a bit of height to spare - I decided to push back through the front to get on the lifty side - wing wobbling around like a jelly, until bashing through the rough and tumble on 3/4 bar, which was much more comfortable.

Past Yeovil, I pushed to a line of clouds to the North of the main line - turns out this was the SBF coming from the Bristol Channel and the wind clearly switch North (instead of due East at launch.

Landed to be met by my mum with a huge G&T and spare ribs for tea: )