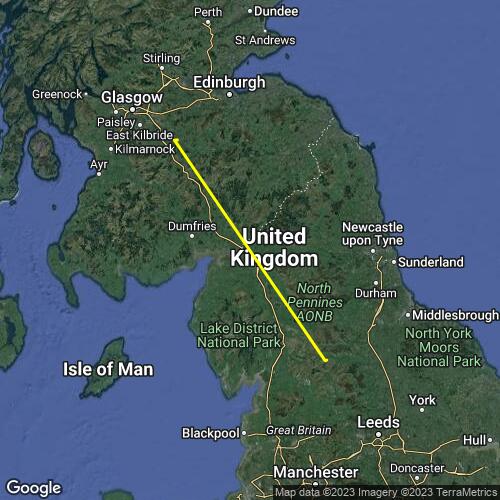 Tricky flight to begin with, took an hour and a half to leave the hill with Jake, Pete and Jacob. Nearly landed after 30 mins just east of Great Shunner Fell but some dogged scratching got me out of that particular hole.

On my own as I transitioned into the Eden valley, Jake spotted me just a couple of km behind him and called me on the radio. Try as I might I couldn't quite catch up with him, closest I got was about one km.

Climbed to base at about 5,500' to cruise across a blue hole before Carlisle. Jake didn't find anything and got decked, I stumbled into a little sustainer which allowed me to push on to a great looking cloud over Carlisle.

Pete caught up a bit north of Carlisle and we flew together for the next 50k or so. The air was quite lively in places, I saw Pete take a front collapse which he handled superbly and took it from bag of washing to flying again in 3 seconds. A little later I had one as well as we battled a feisty lee side thermal. Not long after our collapses we got separated and Pete landed.

Pressing on to my goal the sky was looking good but came to a massive area of wind farms, forest and boonies to the east of Camps reservoir. Decided I didn't fancy that so hung a left (west of course line) to a more civilized route. Started regretting that decision as I got low over some other wind mills but at least these were spread out and there were plenty of landing options without the risk of being chopped up by the windmill blades.

25k out the ridge line to the north west of Camps reservoir provided the climb which let me start to believe goal was possible. That took me to 3,8 and from there the course line took me directly over Tinto which had a really good cloud above it. I took that final climb mmuch higher than required leaving me with a final glide of 5:1. But with the airspace dropping down to 4,5 and the cloud street to Lanark working really well I had to burn off a fair bit to keep legal.

Fish and chip tea in Lanark, train to Penrith then car back to Hawes (thanks Jake, top man)

PB for distance and duration. What a day.