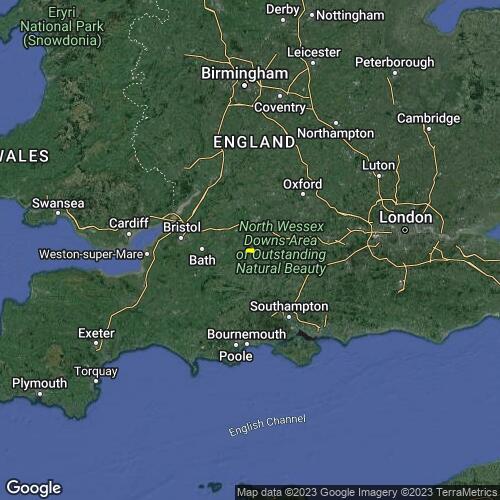 Part One: I've had quite a few sweaty afternoons on Golden Ball in nil wind. But it wasn't quite nil, and a gaggle of rooks gave me a first little excursion above the hill. Then Jim arrived and, rather than relying on my own skill and experience, I chose the much better option of launching immediately after him. Up we went, my skill and Gin Calypso producing about 80% of Jim's climb rate on his Zeolite, so that soon he was well above me. No matter, the climb was smooth and pleasant, taking me steadily up to 3500 feet ASL, with light south-westerly wind. I considered dashing off downwind, but this seemed more a day for seeing what I could do on my own turf. Seeing a sailplane climbing to the west, behind Milk Hill, I set off, and soon noticed Jim climbing with it. The dregs of their climb got me back up to 3200, and I flew over Milk Hill White Horse (where Helen Barnes and Malcolm Beard were scratching), before cruising back to take-off, feeling very pleased with myself. That feeling disappeared as I stupidly swerved around a hawthorn tree on to Nik Valiris's wing. As my feet touched it, I realised that they might plough their way through the cells and lines, so I instantly jumped up, cleared the far wingtip and landed in a heap beyond. Nik was generously forgiving.

Part Two: A bunch of red kites arrived and began squabbling with the rooks. Since their dispute was taking place at an increasing altitude, it was clear that the air to the east of launch was buoyant. I continued past them to the end of the ridge, where a single kite, above the fray, pointed out a proper climb. It went up to 2200, and back over launch another took me to 3300, with Ella now climbing above me, having launched after me and found a thermal out front. By now, Malcolm and Helen had climbed out from Milk Hill White Horse, so I set off to join them. Helen was climbing well, but I joined Malcolm in a thermal before I reached her. After wandering about out front, another climb took me to 3300 over the horse itself. Then I pushed out to the south-east for a bit, hoping to extend the flight over 10k so that I could put it into the league. Back over launch, and down to the car park to land. Mission accomplished, and a much nicer afternoon than I'd expected. There aren't many more beautiful sights than the Vale of Pewsey from three grand.