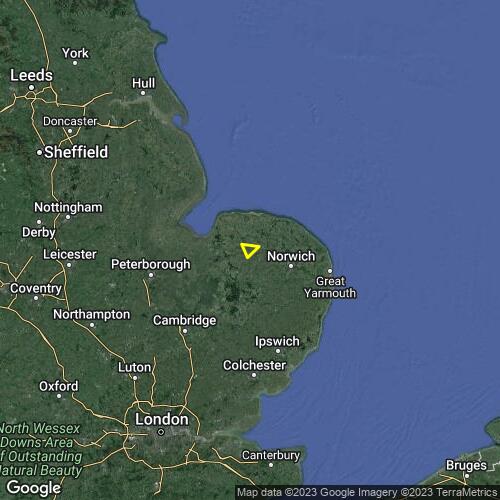 Not sure what was harder; the flight or trying to submit the declared flight on here.

Been a long time in the making trying to fly a declared flight from the tow field let alone a Triangle.

First flight was pretty much a glide back to launch, could feel the day starting, but nothing concrete to climb in. 2nd tow, about 30 min later had me chasing it down wind quite considerably, which meant I was on the opposite side of the MATZ to my first waypoint so I pushed back in to wind to navigate around the Marham Matz. I know I could have flown through them but the skies have been pretty busy of late and knowing the was a Notam to our North of low flying fast Jet manoeuvres, I didn't want to take any chances. Having done that I thought I was down and out at the first waypoint, but a nice smoothest climb of the day over and in to my first waypoint I felt more optimistic that the Triangle was on.

It was relatively easy going if not a little bouncy mainly on glide in to wind, I know many say it shouldn't matter but I do find the flying more challenging flying upwind for some reason. I would still like to be more confident/Brave around clouds, I was leaving climbs early around 4000ft. I was thinking I was in some kind of convergence which might explain the roughness of the air and I was trying to stay out of cloud at 4200-4500ft. But some of the bigger clouds seemed to be much higher. But also there were a few towering clouds, some of the biggest I've flown in at least. But great experience as I threaded my way around edges of the clouds. After getting low a couple of times trying to get to the 2nd turnpoint I was rewarded with a good climb just before the turnpoint, which was drifting me further away the wind was certainly picking up. Finally my instrument pinged I could go on final glide to the goal which was a little optimistic or so I thought, so from 4000 ft I managed to scrap in to goal which was approx. 12Km away.

What a week for me, considering I was supposed to be in Gemona.