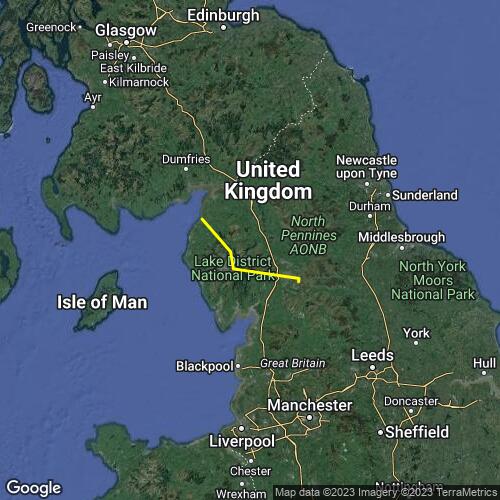 So Friday morning started with a bacon & egg bun at the bakery, before meeting up in Eds back garden with Ed, Chris, and Tam. After some chat regarding transport and site options we settled on Chris`s first choice of Swarth/Wild boar fell.

I had checked the rasp briefly before setting out, and it looked really good for a trip into the lakes, light, mainly easterly, and great star rating.

We arrived at the bottom parking with the hill in full sun, no wind and just a few clouds beginning to form. Nice gentle pace needed for the walk up, rushing does me no good, and then the first decision of the day had to be made ¾ of the way up the hill. Was it to be Swarth or Wild Boar.

The wind direction, just gentle wafts now dictated Swarth, so bear left and carry on up.

As we arrived at the top the wind had increased a little, now around 10mph, but a little off to the East. As always Chris took off first, and although he stayed up it didn't look very good, I thought I might wait a bit longer. He then shot off towards Wild Boar, arriving very low but managed to climb up, then Ed took off, then Tam, now I am the last to get airborne.

Ed and Tam had already started the crossing to Wild Boar, before I launched so I was already I bit behind, my fault for not getting on with it. As I did a few beats on Swarth, Ed and Chris were climbing to base, and off they went as I made a dart across to where they had been.

Arriving low, well below the normal bomb out shelf, just as Ed and Chris had done, there was a little work to do to climb up to ridge height. It was working though and once at the top I could start looking for that climb out.

Wild Boar is a great name for this hill, and for the thermal that took me to base, rock and roll all the way up!

Now at base I was on my own, turned downwind and off towards the Howgills, a little top up to 5500ft just before the A683 then over the hills. I could see Ed and Chris above Whinfell Beacon but I felt another top up was required for me before crossing the M6, so I dilly dallied a little over the west side until I found a small climb to get me above 4000ft, whilst they pushed on.

I crossed the M6 then hung around Birk Knott until I could get back to base. I got a nice long glide off that one, right into the lower Kentmere valley, but was down to 1000ft AGL. And even started looking at landing options.

Another cloud came to the rescue, and I was soon back at base looking across Windermere. I could have crossed straight over from this height, but it looked like a cloud street had formed over the central Lakes, so I headed off on glide to cross at the top of the lake. There was a theme developing here, as long as you could get under the next cloud, there was a climb waiting.

After climbing over Loughrigg, I caught sight of the others again, they were in the Langdales. It felt like slow going but the drift had increased a little which helped, the trip over Elterwater, Dungeon Ghyll, Harrison Stickle, Pavey Arc and High Raise all at a great height was splendid, a chance to admire the view, there is something rather special about being high in the Lakes. It was Ed and Chris catching up now I was off on glide towards Keswick.

After feeling a little smug, I was getting low, really needed another climb now as the only landing options were up on the fellside, so although I had been flying the clouds, now I needed this rounded rock mini mountain in front of me to trigger, and luckily it did, back to 5500ft.

I crossed Derwent water, watched Chris go to Keswick, he had set this as goal, but it was buoyant all around. Ed crossed Keswick at height, whilst I flew over Braithwait and down the west side of Bassenthwaite.

The clouds had run out now so from 5 grand the glide out into the flats begun.

This was a magical glide, smooth as silk, in the sunshine with Ed riding shotgun, I was amazed we made the 16K to the coast, helped on our way by the sea breeze undercutting the meto wind, I think.

92K for me, a PB but even more important was the trip itself, the great sky, and the superb views, how can you not love paragliding!